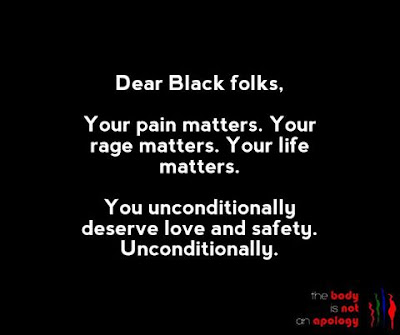 "Two days ago The Body Is Not an Apology shared the image below, affirming the safety and love of Black people. Two million people saw it. 185,000 people liked it and 25 thousand people shared it. Today it was removed from our page and removed from 25 THOUSAND people's pages. We want to know why telling Black people they deserve love and safety is a violation of ANYONE'S Community Standards. We will repost this image EVERY TIME Facebook takes it down until they explain what we are violating! Please help us get this image back. Share Widely and ask Mark Zuckerberg why!"

Per the page, "Facebook removed the "Dear Black Folk" post because many racists with hurt feelings apparently mass reported it.

They have also banned my personal account from posting for 30 days."

A fan of the page recreated the post here. 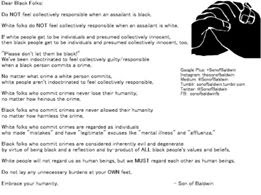