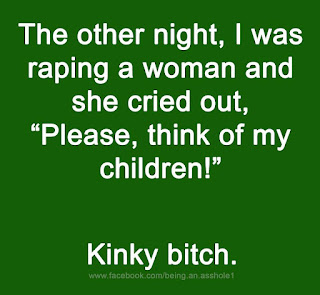 Something is intrinsically wrong with our world when the value of women is so low.

Not only do women have to worry about the never-ending potential for being raped. They also have to endure this potential threat as humorous.

Susie Orbach, psychotherapist, psychoanalyst and writer, stated: “The threat of sexual violence is a violence itself, it’s a complete violation and it’s meant to shut the people up…Rape is different to the threat of rape but nevertheless it’s a very, very serious and threatening experience.”

The fact that these types of pages, pictures and comments are allowed to exist in large quantity on mainstream social media is telling. If we do not prosecute or penalize rape itself, how can we ever hope to remove social media that propagates rape?


http://www.elephantjournal.com/2012/12/is-rape-essentially-legal-trigger-warning/
Posted by The Girl God at 9:35 AM