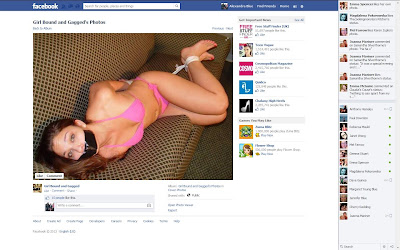 As Director of Policy for Facebook UK and Ireland, would you be so kind as to tell me why the following types of pages continue to be hosted on Facebook, a service that you claim to be suitable for children of 13 years old and upwards? As you are well aware, these represent only a tiny proportion of the huge issue of what Facebook like to refer to as 'inappropriate content' but serve to illustrate Facebook's indifference towards such content very well.

'Girl bound and gagged' https://www.facebook.com/KidnappingGirl
This page has images of young women heavily bound with ropes around their ankles, knees, wrists, thighs, torsos and often with their hands then bound behind them to their feet. In all cases they are gagged either with gaffer tape or with a rag tied around their head through their mouth. The intention is clearly to portray images of women who appear to have been kidnapped and are in a state of duress, for the gratification of the people who enjoy seeing women being restrained against their will and being forcibly controlled.

At the top of the page the admin has written "If you want to look at some of video of Kidnapping and gagging girl check out my Daily-Motion account". This gives visitors to this page an easy opportunity to view further content of this type. However the page itself actually carries one such video showing over 9 minutes of footage young women being bound, gagged and tormented by older women.

In all cases the content on this page has been 'liked' and shared numerous times.

This 'man', for want of a better word, looks to be around 40 years old and states that "i am looking for a boys feet i can suck on all day long" and that "thinks junior sexy".

In addition, Mr Hendricks has 47 friends, many of whom having profile pictures of boys ranging in age from around 8 to 12 years old.

I know for a fact that individuals and groups who are concerned by the presence of people such as this man, have been mass reporting this profile for months and yet it still remains. I reported the profile myself on 13th June and received the response back that it does not violate Facebook community standards and has not been removed.

Again I ask, why is a man who clearly has a sexual attraction towards children, allowed to continue using the Facebook network to indulge his interests and have easy access to communication with children?

This video depicts a Malaysian mother who clearly has mental health issues, beating, slapping and kicking her 8 month old son for the entire 4 minutes 19 seconds that the video runs. The video is filmed by another female who is heard to speak on occasion, a child of around 18 months stands on the bed next to the baby and another female stands in a doorway to the left of the shot.

The mother begins by repeatedly beating the baby, who is on all fours trying to crawl, with a cushion, each time knocking him flat to his stomach on the bed. Each time the child tries to raise himself up only to be beaten back down again. The mother then progresses to slapping the child across the face and legs before then moving on to repeatedly kicking the child in the side of his body. Regardless, the child tries to crawl towards her for comfort but she again slaps each time that he tries to touch her.

This video first appeared on the internet in May 2011 and the mother was later sentenced to 18 months in prison. When my partner and I spoke to you on 28th June with our concerns over the horrific content available on Facebook, we drew your attention to this video in particular. You justified the existence of this video on the Facebook network by saying that it is there "for the community to condemn". When challenged as to how long this video will continue to be hosted for this purpose, you had no answer. So again, I ask you, how long do Facebook intend to host this brutal video of a child being repeatedly assaulted and why are 13 year old children able to view it? When this child is 16 years old will this video still be on Facebook? When he is 30, 50? When?

The presence of this video serves absolutely no purpose other than as pure voyeurism for people looking for shocking content. It should be removed and yet Facebook refuse to under the guise of 'freedom of speech and expression'. The video is also hosted on YouTube in several different forms with a cumulative viewing audience of around 5 million people. Do you think they are all condemning it too Mr Milner? Are you that naive?

Facebook need to get control of this type of content immediately. David Cameron has again failed to hold Facebook to account but rest assured, the public will continue to do so until this and the rest of the vile content on the Facebook network is removed and children are no longer being put at risk due to the continued negligence of Facebook.

Anthony Hemsley
Posted by The Girl God at 9:13 AM