Could you please explain the continued existence of pages on the Facebook network that display images of females bound and gagged, with accompanying sickening comments from users? This type of content has absolutely no place whatsoever on a social network, particularly one that is aimed at those of 13 years and upwards. Such imagery is clearly hugely disrespectful and detrimental to the perception of women in society and their role within it, and only seeks to glorify many mens desire to physically control women and trivialises the issue of this type of abuse. That Facebook are allowing minors unfettered access to this is particularly troubling and could potentially lead to a very skewed view of what is acceptable behaviour. Furthermore, that such content has not been removed during Facebook's process of 'manually reviewing' all pages, a process which Facebook stated would begin on the 1st July, is really quite staggering. 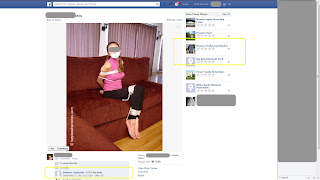 Could you also tell me if there a valid reason why, alongside such content, users are being invited to rate books, films, music, apps and places as well as having other pages recommended to them? As you will see from the attached screenshots, this has today resulted in Disney Hollywood Studios, Paultons Park, Peppa Pig World and The Sun, Mirror and Guardian apps appearing for user-rating alongside horrible images of females bound and gagged. Clicking on the icons for each takes the user through to the relevant Facebook page. 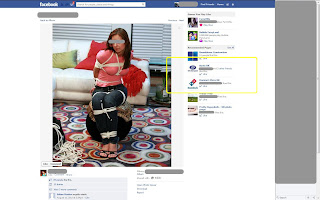 In addition, page recommendations for Domino's UK, Boots, Barbie, Mickey Mouse and Nivea also appeared, today, alongside images of females bound and gagged and again, clicking on each of these takes the user through to the relevant Facebook page.

One of these images is of a female sitting in an open refrigerator with her hands tied behind her back, legs bound at the knees and ankles and a gag across her mouth. 119 people have liked this image and 27 have shared it. User Lee Gramm comments that she is "a cold bitch". 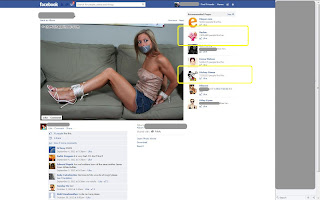 Another is of a female laying on her back on a sofa with her hands tied behind her back and a length of material tied around her head through her mouth. 114 people have liked this and 19 have shared it. User Bill Sommers comments "I wanna jerk off on her face".

Another image shows a female laying face down on a table, head raised up, with her knees and ankles and hands bound with rope and duct tape across her mouth. 98 people have liked this and 20 have shared it. User Don West comments "Served up and ready for??? Very good!"

In yet another, a female lays on her side bound heavily with rope at the ankles, above the knee, below the knee and the thighs. She is also bound with ropes around her upper torso around her upper arms and her wrists are bound behind her back. She has duct tape across her mouth. 68 people like this image and 3 have shared it. User Fab Ligotage comments "Love those tight ropes!". 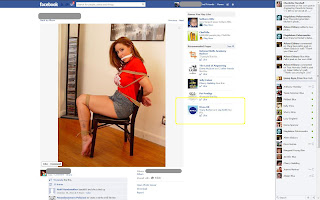 It is utterly farcical how Facebook are seemingly unable to get a grip on this situation. On Friday 28th June it was announced that Facebook would take steps to ensure that brands would no longer be subjected to being exposed to 'inappropriate content' on the Facebook network and that all pages would be manually checked for compliance, and brands exposure limited to a 'core 10,000 gold standard pages'. And yet here we are three weeks later and brands are still being unwittingly exposed by Facebook to content that they clearly will have no desire to be associated with. I cannot begin to think that these companies will regard this as anything other than completely unacceptable.

I put it to you that Facebook have totally failed in their attempts to stop brands reputations being sullied by association with such content and that Facebook have absolutely no option other than to accept that vile, offensive and often illegal content is being hosted on Facebook servers, and start to remove it. This should have been Facebook's initial response rather than trying to appease the companies who advertise with you whilst allowing this kind of content to remain.

Facebook is not a safe or suitable place for children and Facebook simply cannot be entrusted with the safety of companies brands.

(Note: pictures here are just a random sampling of over 100 that were sent to me this am and do not represent the text.)