"The Palestine Information Center (PIC), an independent Palestinian news website and network had their Facebook page temporarily suspended for publishing a 2009 cartoon by Brazilian political cartoonist Carlos Latuff. The graphic shows a woman walking and carrying a wounded child in front of an Israeli flag with one of the blue banners of the flag covering her mouth. Latuff’s text issued a warning:  “SHHHHHHHHHH!!! Denouncing Israeli War Crimes Is Anti-Semitism“.

Rami Salaam, an administrator of PIC’s English Facebook page told Mondoweiss “Cartoons are usually targeted by Facebook more than anything else. Maybe because they appeal to people everywhere. Latuff’s cartoons are widely shared on our page and maybe that is why it was removed.”

PIC was not warned or notified prior to the removal of the cartoon. “It just disappeared” according to Salaam. He continued, “When we tried to login we got a message saying that that cartoon was removed because it violates Facebook polices and that our account that posted the cartoon is suspended for 3 days. – The reason for the deletion and suspension is fickle and meaningless because the cartoon is not graphic nor does it incite any kind of violence. The reason given is “We removed the post below because it doesn’t follow the Facebook Community Standards.” They also threatened to delete the whole page.” 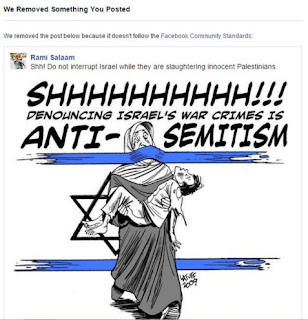 Read the full post by Annie Robbins with screenshots at Mondoweiss