Seven people murdered in a hate crime targeted at women and someone already made a Facebook page: "Elliot Rodger is a Hero".

I wonder how many of these will spring up and whether Facebook will remove them?

"This page is a tribute to a real American hero."

Pierce Ayanami Smith wrote on the page:
"He didn't let them suffer enough. The victims all either died nearly instantly, or will survive. Not good enough, if you ask me. They need to be tortured, for hours on end, knowing with certainty that their death will be coming, but not permitted to get it until their bodies absolutely cannot take any more physical pain." 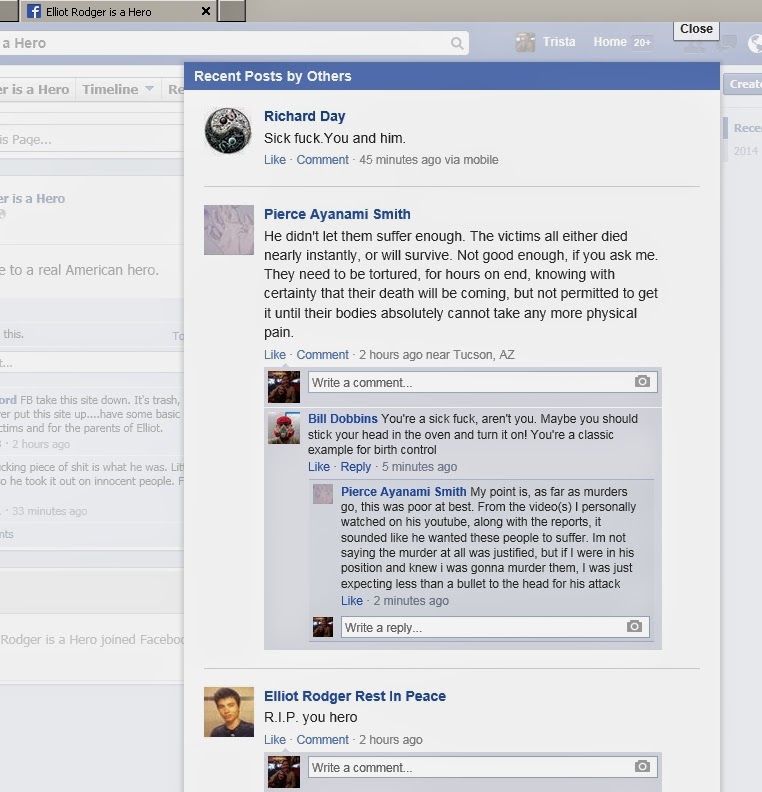 Update: the first page is down - many more are still up.

And this gem, with a post with what appears to be Rodger as a child that says:


"Think for a sec if one of the women that turned him down put out for him once. Then all of this could have been prevented. People need to do their duty for humanity."

New one: Elliot Rodger is an American hero blames feminists:

"Feminists, whether you like it or not, you are the cause of this incident.
You have empowered women to essentially bully and reject people, and in this case it would seem that this happened to some poor kid with Autism.

A generation of self important narcissistic cows have been raised rather than the nicer ladies of the previous generations. Who's fault is that? That's the feminist's fault."

"Shoutout to my boy elliot rodger. He did the best thing us men could do. And paid the ultimate price. Let his death be a memorial day in which we hate against the subhuman species called women."
Posted by The Girl God at 12:24 PM