Calling on feminist programmers: It’s time for a mass exodus from Facebook

This is how far things have come.

I have just been banned from FB for 7 days for posting a link to this event: We are closing our accounts!

It seems that images promoting rape are perfectly okay, according to Facebook, but you can be banned for posting images of breastfeeding, such as this example here… 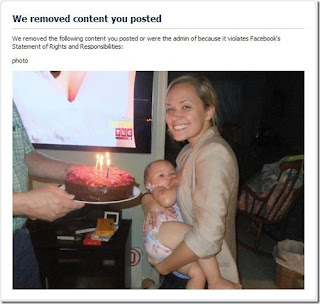 Remaining on the site helps generate ad money for Facebook. The only way to really hit the site where it will hurt is by leaving.

I’m not a programmer, but I am calling on programmers now. We need an alternative. I would love a place called khaleesi.net (after Daenerys) or something to that effect. Would especially love a feminist-backed and/or managed social media alternative. If creating an alternative is unrealistic, then we need to find out what alternatives exist that can be promoted as the new domain for those who are absolutely fed up with this disgusting situation.

Social networking is invaluable in the modern age, but being complicit in funding a corporate empire that allows rape culture, child abuse, hate speech, silencing of activists, and shaming of mothers has got to stop.

Here’s my call to programmers of the world: I, for one, will switch tomorrow. The online protest against Facebook has thousands of supporters and is growing exponentially every day. Your time would be well spent.

See original post at When women were warriors
Posted by The Girl God at 6:41 PM